You’ve got this!
Crowds cheering runners at the New York City Marathon 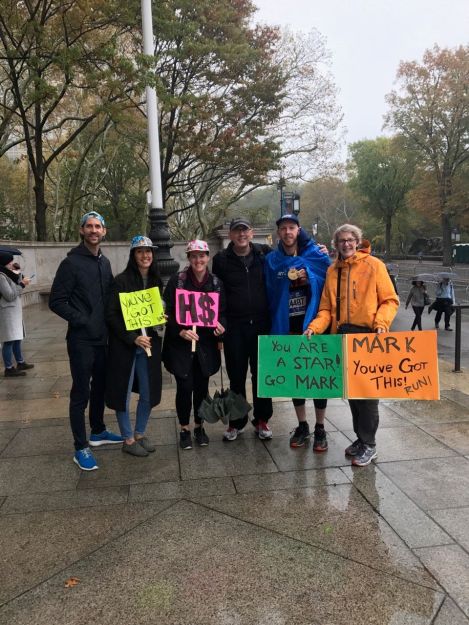 On November 5, 2017 more than 50,000 people ran the New York City Marathon and our son Mark was one of them. This larger than life experience was something to behold. In spite of overcast skies and misty drizzle, throngs of people came out, shouting to the runners to keep going, calling their names, and cheering wildly. I was among them, along with family members and friends.

Why on earth would anyone want to run 26.2 miles? It is simply one of those extraordinary experiences that place you within something much larger than yourself. And once you’ve been part of it, as a runner or observer, you understand.

The energy of the New York Marathon is palpable, drawing you in. We planned our spots along the route hoping to catch Mark’s eye. This is no small feat. You think you would be able to see someone you know but runners are like quicksilver, lost in the moving mass of people. Incredibly, we were able to see him- and he saw us- at miles 16 and 24. He looked remarkable, upright and smiling, running at a good clip as the group around us shouted in support: Mark, Mark, Mark!

Of course there is more than one way to do a marathon. A whole community follows runners through a great tracking app- moving from point to point along the route by subway, bicycle, or foot in order to see your runner go by and cheer them on. It is a form of community through public transit in which strangers talk to each other, compare notes, and admire each other’s signs. And when you are waiting in the crowd for your loved one to run by, you cheer along with others calling the name of their favorite runner. We cheered Steve (whoever he was) and Steve’s family cheered Mark.

The race is one point in a long journey. It takes months to get the starting line – a time line of hours and hours of training; planning to get to New York; and getting mentally prepared. The muscles of tenacity and grit are strengthened beyond what you thought was possible. But mostly it takes courage to train and step up to the starting line. Running a marathon means putting yourself out there for everyone to see without really knowing what the eventual outcome will be. It’s a leap of faith and it’s a BIG deal.

We saw all of it in New York: the hopes, the frustration, the exhaustion, and the exhilaration, etched in the faces of ordinary people doing something extraordinary.  I was in awe of each and every runner- gazelles who made it look easy; people of different abilities accompanied by guides; individuals in wheel chairs; runners who struggled but kept going. It took me back to the 2014 Marathon. How did Nicole and Jodi and I ever do this?

Mark had a fantastic run and the celebration after was sweet.  Some people think that those who run marathons have to be out of their minds. But I know that anyone who crosses that start line – however the run turns out- is a SUPERSTAR! And so with heart felt exuberance and hope for every runner, you call out: You’ve got this! 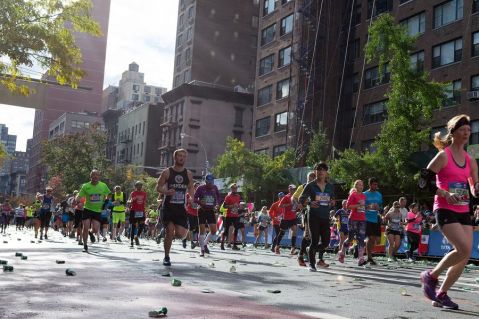